Areas to visit in the Western Cape of South Africa September 9th, 2015 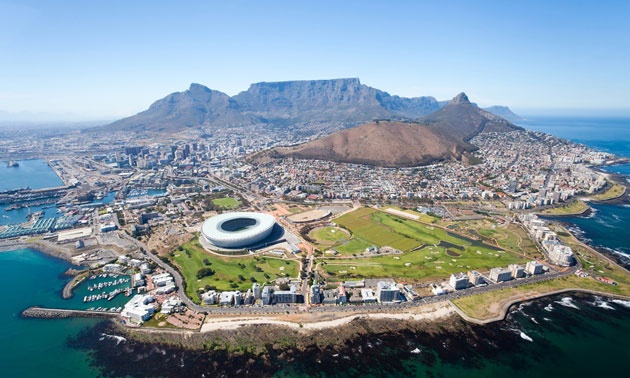 Areas to visit in the Western Cape of South Africa

The Western Cape Province in South Africa can be divided into six areas.

The Klein Karoo lies between the Outeniqua, Langeberg and Swartberg mountain ranges, it is an area of contrasting landscapes, magnificent sunsets and ostrich-producing Oudtshoorn. The Central Karoo is dryer and more vast, is the main sheep farming region in the country, is world-renowned for its fossils and its capital Beaufort-West was the birthplace of heart-surgeon Dr. Christiaan Barnard. Don't miss eating Karoo Lamb at one of the fine restaurants.

The Cape Peninsula stretches from Cape Town's city centre to Cape Point, where the Atlantic and the Indian oceans meet. Along this coast you will find the Western Cape's famous beaches e.g. Camps Bay and Clifton and the nudist beach of Sandy Bay. Visit the enchanting fishing villages of Hout Bay with its famous Mariner's Wharf and Simon's Town with its Boulders beach and seal colony. Activities include bathing, diving, fishing, hiking, visiting museums, forts, art routes, shopping and enjoying the excellent seafood on offer. Carved into solid rock, Chapman's Peak Drive is one of the most spectacular mountain drives in the world, starting in Hout Bay and ending at Noordhoek allowing you to enjoy the panoramic scenery at several look-out points.

Home to many of the country's best, award-winning wines, the region features vineyards and fruit orchards in beautiful green valleys surrounded by mountain ranges and dotted with historic towns and villages. Towns that are a must-see include Somerset West, Stellenbosch, Franschhoek and Paarl, world-famous for their whites, reds, sherries, ports and brandies. Wine routes and brandy routes can be explored including tastings along the way.

This is the largest fruit and wine producing valley of the Western Cape and is the country's leading racehorse breeding area. The area stretches from Gouda in the west, McGregor in the south, Montagu in the east to Tankwa-Karoo National Park in the north. This is an area of magnificant views, panoramic lanscapes and towering cliffs, crystal-clear streams, an abundance of trees and indigenous flora such as fynbos and proteas.

The Garden Route, with its spectacular scenic beauty, runs parallel to the Cape coastline featuring lakes, mountains, tall indigenous forests, amber-coloured rivers, golden beaches and towns along the way. Meandering trails are followed by hikers, the forest invites long, leisurely drives, and the lakes and rivers lend themselves to swimming, boating and fishing. Must-see towns along the way include the Garden Route's gateway, George, Wilderness, Sedgefield, Knysna with its famous Heads and oysters and Plettenberg Bay. The area is phenomenal for adventure seekers and nature lovers.

Hermanus offers the best whale viewing from land in the world with a cliff path stretching from one side of the town to the other and a whale watching hotline. Walker Bay is a nursery for the great Southern Right Whale and don't miss Bientang's Cave where you can taste excellent seafood inside a cave and view the whales. Don't miss the Harold Porter National Botanical Garden with over 5 hectares of cultivated fynbos garden and 195 hectares of natural fynbos; the delightful fishing village Arniston, the southernmost tip of Africa - the Cape Agulhas Lighthouse Museum, Caledon for its Wild Flower Show in September and hot mineral springs and the charming colonial town of Swellendam.

Come to the Western Cape Province in South Africa a wonder filled destinations.

Gerald Crawford was born in South Africa, studied electronics, telecommunication, eco-travel and african travel concepts. He taught responsible tourism in South Africa. If you have any questions or comments please e-mail me on. E-mail Address: southafricantravelarticles@12234455.co.za Website Address: http://www.12234455.co.za